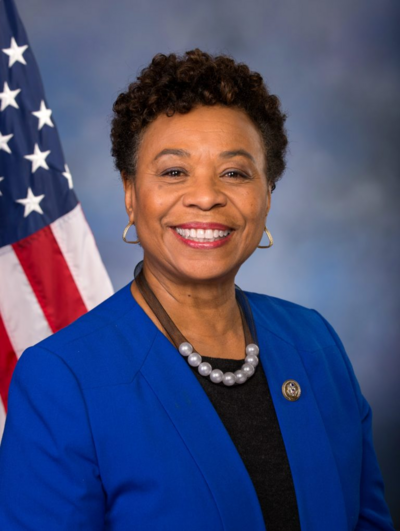 Everything Barbara Lee (MSW '75) does – be it campaigning against poverty, advocating for AIDS research, or voting against giving the President the power to declare war – is informed by the social work values she learned at the UC Berkeley School of Social Welfare.

"A clinical psychologist must speak out on every crime against humanity that has produced discontent, sick and frustrated individuals," Lee wrote in her application for admission to UC Berkeley’s School of Social Welfare, "Whether that be through politics, development of programs, or helping effect change in the various social institutions which I see as responsible for this discontent."

Born in El Paso, Texas, Lee quickly grew to become an activist and advocate for her community and the most vulnerable within it. Throughout her young life she encountered the lasting legacy of discrimination that had enslaved her great-grandmother -- "whites-only" drinking fountains, denial to movie theaters and drive-in restaurants, and segregated schools.

Life in California didn’t turn out to be much better than it was in Texas for a young black woman. Schools in the town of San Fernando, where her family moved in the early 1960s, were also segregated. In fact, with help from the local NAACP, Lee battled to be allowed to tryout for cheerleading at San Fernando High School.

"I saw poverty, lack of jobs and drug abuse in neighborhoods large and small filled with primarily blacks and Latinos, and I began to understand institutional racism as it was manifest in the ghettos and barrios of Southern California," writes Lee in her book, Renegade for Peace and Justice.

Lee was not immune to the hardships she saw around her – at the age of 16 she became pregnant and later had to receive public assistance in order to make ends meet. The experience was humbling, and gave her important insight into the stress and fear a mother feels at the prospect of not being able to meet her children’s basic needs of food, shelter and clothing.

Lee received a HUD fellowship to attend the School of Social Welfare in 1973 and enrolled in the community mental health track, focusing on clinical social work. In her work she found a lack of clinical treatments relevant to African Americans and went on to found the Community Health Alliance for Neighborhood Growth and Education (CHANGE). Soon after receiving her degree she traveled to Washington, DC to work for then Congressman Ron Dellums (MSW ’62).

"[Dellums] asked me if I would come back and head up his office," said Lee in a speech in 2001 where she was honored by the Social Welfare Alumni Association. "I said, 'Wait Ron, I want to be a social worker. I want to be the best psychotherapist in the world.' That was my goal. Never did I believe or think that I would be here! But I always say that what I was taught in training as a clinician and as a psychotherapist is to let your life evolve, understand what’s coming, and don’t program yourself too much, because otherwise you may miss some opportunities. And somehow, I got to where I am going. But I just want to say it has been with your help, and with your guidance, and with the foundation of this School that I’ve been able to move forward and fight the good fight."

Lee served in the California state assembly and state senate, and was elected to the US Congress in 1988 to represent California’s Ninth Precinct, which includes Berkeley and Oakland. She has held the position ever since, and today currently serves as Chair of the Congressional Black Caucus. She is perhaps best known for being the only member of Congress to oppose President Bush’s request for authorization to use “all necessary and appropriate force” after the September 11, 2001 attacks, but has been involved in countless reforms aimed at improving health and education, the environment and those in poverty.