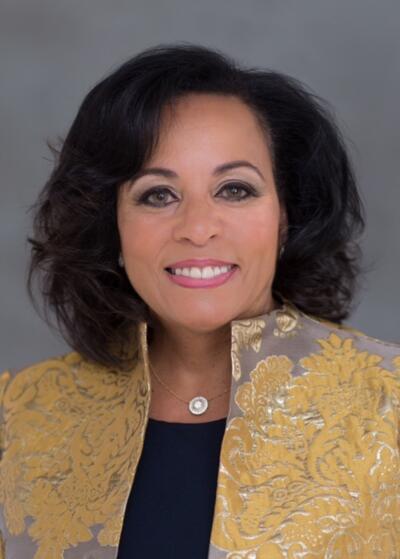 Clothilde “Cloey” Hewlett received her B.A. in political science from UC Berkeley in 1976 and her J.D. from the UC Berkeley School of Law in 1979. Prior to joining Cal Alumni Association, Cloey’s career has spanned law enforcement, state regulatory oversight, and government relations. She has served California under three different governors.

Cloey’s life growing up was framed by poverty from experiencing rural poverty in upstate New York, to tenement living in Philadelphia to San Francisco surrounded by crime, drugs and violence. Her childhood reflected the changes being advocated by the Civil Rights movement of the 20th Century; her mother helped to train the Freedom Riders who participated in the desegregation missions in the South. Cloey’s life changed at the Community Streetwork Center in San Francisco when a volunteer named Jerry Brown--who later became Governor of California--encouraged her to attend UC Berkeley.

Cloey began her career as a pioneer in law enforcement as an Assistant District Attorney in San Francisco. She was one of the first Women Peace officers and became a member of the San Francisco Police Commission. During her tenure, Cloey worked to implement community based policing and police officer de-escalation training. After leaving law enforcement Cloey went to the State Bar of California and created the Moral Character unit for admission to practice law in California which is still in place today.

Cloey returned to her passion she discovered at UC Berkeley: public policy. As Interim Director of the State of California’s Department of General Services and Undersecretary of the State and Consumer Services Agency, she managed 16 state agencies with oversight over procurement, real estate, and  telecommunications; victim’s compensation, personnel, and information technology; consumer affairs and the CalPERS and CalSTRS retirement systems. She led the team during California’s 2001 energy crisis, and created the Flex Your Power Campaign. During the events on September 11, 2001, her responsibilities included oversight of the State of California’s Victim’s Compensation Board, providing support to survivors and the families of victims.

Cloey continued her path as a partner at K&L Gates and then Nossaman, LLP, advising national and global corporations, as well as sports teams. She focused on government contracting, crisis management, appropriations, and diversity initiatives. She’s worked on signature sports and local economic development efforts for the Santa Clara Stadium Authority and Sacramento Kings; Cloey served as the co-chair of FIRST Community Advisory Council for the Golden1 Entertainment Sports Center.

Throughout her career, Cloey has been committed to and actively involved in raising the next generation of leaders. Cloey was a co-founder and first President of Black Women Lawyers of Northern California. For over 12 years, she has been a member of the Board of Directors for the San Francisco 49ers Foundation. Cloey has also been extensively involved with her alma mater, serving as a board member for CAA; as a speaker, panel moderator, reunion co-chair for Berkeley School of Law; and honorary reunion chair for her 40th reunion. In 2016, Cloey became the second woman and first person of color in over 144 years as Executive Director of the Cal Alumni Association.

For her dedication to these efforts, Cloey has been recognized for her significant professional and community contributions. She is a recipient of the Commission on the Status of Women Leadership Against Domestic Violence Award; the Black Women Lawyers of Northern California Outstanding Achievement Award; San Francisco Police Department Award for Bravery. Cloey has received CAA’s Excellence in Service Award; the Adhama Award from Berkeley School of Law’s Journal of African-American Law & Policy; Wiley Manuel Law Foundation Legal Pioneer award; and the Berkeley School of Law California Law Review Alumni of the Year Award. She has also received the Silver SPUR Award for Lifetime Civic Achievement; the Latino Journal’s Excellence in Public Service award; Cloey has been honored on the National Diversity Council’s Most Powerful and Influential Women of California; San Francisco Business Times Forever Influential Honor Roll; and Women Leading Change from the National Coalition of 100 Black Women.