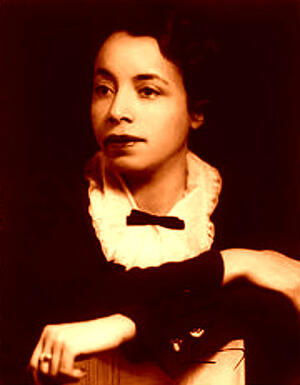 Louise Alone Thompson Patterson (1901-1999) is a notable African American Berkeley alumna whose adventurous life is less well known than Jackson’s, despite her international scope. She overlapped at Berkeley with both Vivian Osborne Marsh and Ida Jackson. Jackson, who lived in New York, traveled widely to organize and speak on behalf of political causes she believed in.

Patterson, whose maiden name was Thompson,  graduated from Oakland High School at fifteen. At that time UC Berkeley was open to all high school graduates who had completed the college curriculum and were recommended by their school. Patterson lived with her mother in a house near campus on Bancroft Way, where much of her social life took place. She enrolled in the College of Commerce and completed a major in economics and a minor in Spanish. In March of her senior year, she attended a lecture by W.E.B. DuBois, the most important Black intellectual of her time, on “The Economic Condition of the Negro in the United States.”  Patterson was spellbound: “He stood up. First of all, his presence was something. He commands you just when he stands up.  And then he spoke. He didn’t look at a note. He didn’t read it from a paper…And the hall, you could hear a pin drop. They listened. And I walked out feeling, well, it is something to be black.”[1] Neither the Daily Cal nor the Berkeley Daily Gazette reported on DuBois’s campus address. Louise was shocked that DuBois hadn’t been mentioned in her History of Education class. Later she wrote later to DuBois asking for a job on the Crisis, the most respected Black magazine of the day. Thompson graduated with honors among the top sixteen students in a class of 182 economics majors.

A self-described rebel,  Louise Thompson Patterson engaged in lifelong political activism, from defense of the Scottsboro Boys case to freeing Angela Davis. She joined the Communist Party, and followed poet Langston Hughes to New York in 1928, where she worked among artists, writers, and intellectuals in the Harlem Renaissance. Zora Neale Hurston was one  of her employers. Patterson’s friendship with Hughes lasted until the end of his life. At the invitation of the Soviet Union, she traveled with Hughes to Russia in 1932 in a group of young African Americans associated with the cultural life of Harlem. They were promised that they would make a film about race in America to be called “Black and White.” The Soviets planned to illustrate the oppression of African Americans in America and to attract them to the Communist party, but the film did not pan out. Thompson returned home but in1937 she joined Hughes, Paul Robeson and other American communists to assist Spain during the Civil War.

Patterson sustained a lifelong battle for social justice. In 1970, Patterson stepped forward as the Executive Secretary to the New York Committee to Free Angela Davis. Davis, who had taught at UCLA, was incarcerated in connection with a shootout at the Marin County Courthouse, because a handgun registered to her was recovered at the scene. Patterson organized and participated in events to defend Angela Davis in the US and Europe. At the age of ninety, Patterson returned to the Berkeley campus to attend at the Seventeenth Annual Black Graduation, where she received the Fannie Lou Hamer Award.