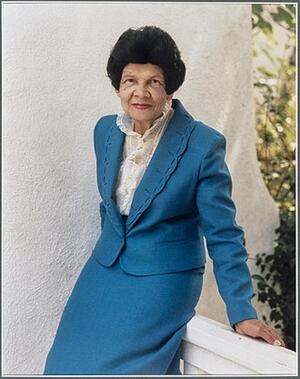 Miriam Matthews was born in Pensacola, Florida and at the age of two her father and mother made the decision to move to California. She graduated from Los Angeles High School in 1922 and then spent two years at the University of California, Southern Branch (Los Angeles). She then transferred to Berkeley where she joined the Delta Sigma Theta Sorority started by Vivian Osborne. At Berkeley, Matthews earned her Bachelor’s degree in Spanish in 1926, and was elected to the Spanish honorary society Sigma Delta Pi, following in the footsteps of Louise Alone Thompson. She earned her certificate in Library Science in 1927, becoming the first credentialed African American librarian in the state of California and the first hired by the Los Angeles Public Library (LAPL).

During this time, Matthews stayed connected with the Deltas, succeeding Vivian Osborne as the second Regional Director of the Sorority’s “Farwest” region from 1929-1930. When she realized how few resources LAPL held on Black history, she began collecting materials on the subject, which she shared with librarians, researchers, and other users. She also spearheaded efforts in 1929 to establish “Negro History Week” in Los Angeles which then became “Negro History Month. From 1949 until her retirement in 1960, she served as regional librarian for LAPL, supervising twelve branch libraries in LAPL’s South Central region.

She also served as both a member and chair of CLA’s intellectual freedom committee during the late 1940s. In 1977, she was appointed to the California Heritage Preservation Commission, where she led efforts to identify important Black institutions. The Los Angeles Historical Society established an annual Miriam Matthews Award in recognition of her work, and in 2004, the Hyde Park branch of LAPL was renamed for her.

Contributed by Gia White and the California Library Hall of Fame