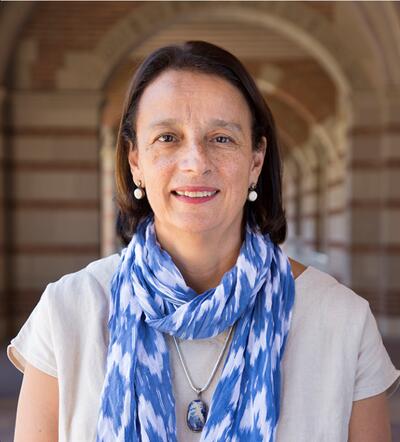 Patricia Turner is a professor in World Arts and Cultures and African-American Studies whose research focuses on racial dynamics as they surface in folklore and popular culture. She holds a bachelor’s degree in political science from SUNY College at Oneonta and a master’s and Ph.D. in rhetoric from the University of California, Berkeley. Her dissertation, "Tampered Truths: A Rhetorical Analysis of Antebellum Slave Narratives" challenged existing views of slave narratives. A Humanities Graduate Research Grant funded her work in the summer of 1983 reading original slave narrative texts housed in the Moorland-Spingarn Collection at Howard University, the Library of Congress, the Schomburg Center for Research in Black Culture, and the New York Historical Society. Her fourth book, Crafted Lives: Stories and Studies of African-American Quilters, was published by University of Mississippi Press in 2009.

Changing perceptions through African American folklore, in her own words:

"I was in graduate school earning my Ph.D. in rhetoric when I attended a lecture on the ways in which a culture's most popular proverbs are a reflection of that culture's worldview. It stirred memories of my childhood –  listening to sermons, hearing stories of past African American experiences. I realized then that I could apply rhetorical theory to African American folklore. It was an important field for me to enter  – introducing the many traditions of African American folklore allows us to see how extraordinarily diverse the experience is.