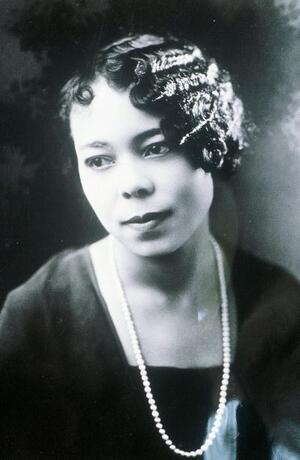 Vivian Osborne earned two degrees at Berkeley: a bachelor’s in 1920 and a master’s degree in 1922, both in anthropology. Osborne was the first African American woman to earn a master’s degree from Berkeley’s Anthropology Department. She wrote her MS thesis was “Types and Distribution of Negro Folklore in America.” Born in Houston, Texas, Osborne moved to California at the age of fifteen with her widowed mother, and graduated from Berkeley High School. In 1921, while a student at Berkeley, Osborne founded the Kappa chapter of the Delta Sigma Theta, the first sorority at Berkeley for African American women and the first Delta Sigma Theta chapter West of the Rocky Mountains. Delta Sigma Theta, which was founded at Howard University in 1913, proclaimed a dual purpose of “academic excellence and social service.” Osborne maintained a passionate, lifelong association with her sorority. From 1935-39 she served as the seventh national president. One of her initiatives was a traveling library for children in rural Georgia. She hosted many meetings of the sorority members in her home in Berkeley.

After marrying Leon F. Marsh, Vivian Osborne Marsh and her husband were community activists and influential leaders in many organizations in San Francisco and the State. During the Depression Marsh led the Division of Negro Affairs of the National Youth Organization, which found jobs for unemployed youth. She was elected president of the California State Association of Colored Women in 1941 and was active in the National Council of Negro Women. During WWII, Marsh led the Women’s Ambulance and Defense Corps of America. She ran for City Council of Berkeley with the support of several organizations in 1959 but lost. The city of Berkeley declared Vivian Osborne Marsh Day on February 21, 1981 to honor her leadership and significant contributions.

Contributed by Sheila Humphreys of the EECS Department, from forthcoming essay “Early Scholars of Color at Berkeley” 2021